There is an interesting paper in the current issue of Science on the subject of transferring power wirelessly via strongly coupled magnetic resonances. The story is also reported today by the BBC.

Wireless networking is now ubiquitous, and before long the majority of homes with broadband Internet connections will have wireless routers installed. These remove the need for network cables, and enable laptops to connect to the Internet even when the user is lazing in the garden or taking a dump. But if your home is anything like mine, there remains a rats nest of mains cables in every room, and in my case I’ve given up attempting to keep things tidy and dust-free.

Ever since Nikola Tesla‘s experiments at the end of the 19th century, there has been talk of powering electrical devices without the need for cables. Solutions to the problem have usually involved directed energy transfer via radio waves or laser beams, but these are not suitable for use in the home where an uninterrupted line of sight is required. 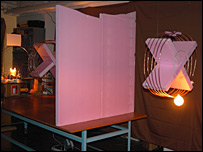 In the latest research, carried out by André Kurs and others at the Massachusetts Institute of Technology (MIT) in Cambridge, US, electrical energy is transferred through electromagnetic resonance between tuned copper coils.

The principle is somewhat similar to that of a transformer (e.g., ‘wall wart’), where the mains voltage is stepped down via the induction of a current in a conductor placed in a changing magnetic field. The current in the coil on the mains side of the transformer induces a current in the other coil, despite there being no physical connection between them. The English physicist Michael Faraday is generally accepted as being the discoverer of electromagnetic induction.

Mains transformer coils do not touch, but they are placed next to each other. With the MIT setup, the coils are some two metres apart, and, through coupled resonances, enough power is transferred across the gap to light a 60 watt bulb, even when obstructions such as wood and metal are placed between the coils. The energy efficiency is rated at 40%.

Apart from the low efficiency, this is most impressive, but when there is concern over mobile phone radiation, and (unfounded) fears of Wi-Fi signals scrambling the brain, what about stray electromagnetic fields carrying far higher power levels?

With the MIT experiment, the length of the electromagnetic waves is around 30 m, which is very different from the 13 cm microwaves used for mobile phones. With microwaves, the radiated field has a mix of electric and magnetic components, and it is the electric component that interacts with water in biological tissues, and cooks your TV dinner. With the much lower frequencies used in the MIT experiment, the radiated field is almost entirely magnetic, and magnetic fields do not have the same biological effect. This is why your brain is not fried by the intense magnetic field in a hospital MRI scanner.

Wireless power is almost certainly safe, but when increased energy efficiency is regarded as crucial in the battle against man-made climate change, what about the waste of energy involved? The MIT setup may be experimental, but an efficiency of 40% is worrying low when compared with the >95% efficiencies of domestic mains transformers. I would like to know by how much the efficiency is likely to increase as the technology develops. This technology will have a massive impact when commercialised, and there will no doubt soon be pressure to do just that.

While I’m tempted to do some back-of-envelope calculations, I will for the moment resist, and hope that likely energy use scenarios are modelled by those with ready access to the data, and enough time to do the job properly. For example, I would like to know how widespread use of wireless power will compare with standby power and other wasted domestic electricity.

There is great potential in wireless power, and I’m sure it will prove very useful in certain situations. I just hope that the convenience it provides does not lead to an unnecessary waste of energy. As for my laptop, I would rather see reductions in power consumption, much higher capacity batteries, and a recharging mechanism that involves placing the computer on a cable-free docking station. I have no interest in recharging my laptop wirelessly from across the room.