No, I do not mean spliff up in the street, although that’s fine as long as you’re not in charge of a vehicle or other heavy machinery. I’m referring instead to the Big Ride tomorrow – Saturday 28 April 2012 – organised by the London Cycling Campaign… 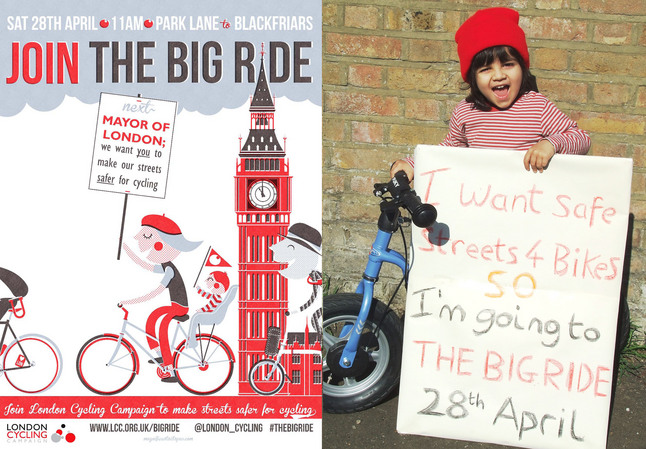 I shall be helping marshal this family-friendly event, which will see thousands of cyclists process slowly from the top of Park Lane to Temple Gardens on Victoria Embankment, on the way taking in Piccadilly, Regent Street, Pall Mall, Trafalgar Square and Whitehall. The Big Ride route will be closed to motor traffic, with radio-controlled stewards positioned at all crossings and junctions, and police and other emergency services on hand throughout. Around 50 specially selected and highly photogenic Masters of the London Cycling Universe will head the procession, and it is hoped that the hideous beauty pageant of London Mayoral candidates will join them.

LCC borough groups will be running feeder rides to the main Big Ride start point on Park Lane. I shall be leading the Greenwich feeder, which will depart from Cutty Sark Gardens, SE10 9LW, at 09:30. By the way, the newly reopened Cutty Sark ship is a delight to behold.

The forecast is for a rain-free Saturday until late afternoon, following which another deluge that will last until late on Sunday. So, if you’re in or around London, have access to a bike, and care about the city’s cycling infrastructure, you are duly summoned to attend the Big Ride. Consider this a three-line whip. Dissenters will be shot.